This week, on Thursday March 1st, marks the beginning of Purim. In the Jewish calendar the date is the 14th day of Adar, 5778. Purim is a celebration to remember Esther’s great courage in stopping the genocide of the Jewish people in 5th century BCE.

We are to give gifts to others

Today the celebration of Purim is marked by a festive meal (seudat Purim), wearing costumes, giving donations to the poor, and exchanging gifts of food and drink (mishloach manot). Most of these traditions come directly from the Book of Esther:

Then Mordecai recorded these events, and he sent letters to all the Jews who were in all the provinces of King Ahasuerus, both near and far, obliging them to celebrate the fourteenth day of the month Adar, and the fifteenth day of the same month, annually, because on those days the Jews rid themselves of their enemies, and it was a month which was turned for them from sorrow into gladness and from mourning into a holiday; that they should make them days of feasting and rejoicing and sending portions of food to one another and gifts to the poor.

We are to joyfully give gifts to others in response to the great gifts God has given us. 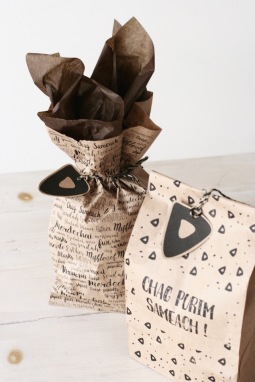 We are to give gifts to God

YHWH requires something of you. During the age of the Tanakh (Old Testament) that was a sacrifice brought to the altar of God at the three major festivals. Note that they were to give as they were able, according to the blessings they had received.

The Psalmist recognized that God has received gifts, even from the rebellious… and He received them so that He can dwell among us. Giving a gift to God brings Him right to us… right to where we are:

You have ascended on high, You have led captive Your captives; You have received gifts among men, even among the rebellious also, that YHWH God may dwell there.

Blessed be the Lord, who daily bears our burden, the God who is our salvation.

God gives the greatest gifts to us

Many people see the greatest gift God has given us is eternal life. But I suggest that is merely a bi-product of two greater gifts.

First is the gift of life. You were created. You are a soul designed by God, to live life to the fullest. Without the gift of life you would be void… nothing… inconsequential. But you were given this awesome gift. You are a spark ignited by God to do great and wonderful things! God CHOSE YOU to exist and so you have every reason to be here, equal to everyone around you!

But living life to the fullest is so hard when you carry the burdens of the world on your shoulders. God doesn’t want us to be chained down. He wants you to be free! And so He sent another gift… his most precious possession, His Son, the Anointed One, Yeshua HaMaschiach… Our Salvation, Our Messiah!

In John 5:1 we read that, “Some time later there was a feast of the Jews, and Jesus went up to Jerusalem”. There has been much debate over which feast this was; many theologians suggest that this was Purim. There is no clear answer, but it is interesting to consider what Yeshua did and taught during this particular visit to Jerusalem. His first act, that we are made aware of, was to heal an invalid man. This happened on the Sabbath:

Now because Jesus was doing these things on the Sabbath, the Jews began to persecute Him. But Jesus answered them, “To this very day My Father is at His work, and I too am working.”

Because of this, the Jews tried all the harder to kill Him. Not only was He breaking the Sabbath, but He was even calling God His own Father, making Himself equal with God. So Jesus replied, “Truly, truly, I tell you, the Son can do nothing by Himself, unless He sees the Father doing it. For whatever the Father does, the Son also does. The Father loves the Son and shows Him all He does. And to your amazement, He will show Him even greater works than these. For just as the Father raises the dead and gives them life, so also the Son gives life to whom He wishes…Truly, truly, I tell you, whoever hears My word and believes Him who sent Me has eternal life and will not come under judgment. Indeed, he has crossed over from death to life.”

Here Yeshua teaches that He is the Son of God who truly gives the gift of life… and sets us free from death. It is the perfect message for the celebrations of Purim! Remember that Purim is a celebration to remember Esther’s great courage in stopping the genocide of the Jewish. Yeshua, like Esther, knows His life is in danger. People want to kill Him! That does not stop Him. With great courage He announces His purpose… He came to save us! With His sacrifice we can cross over from death to life! Esther stopped a genocide; Yeshua stopped death from taking YOU.

But you have to take the gift. What is the point of a gift offered, if it’s not received? There are a lot of living dead on this planet… feeling weighed down by chains of sorrow, guilt, poverty, self-doubt and loathing; just existing day by day, without real joy, without focus or intention, without hope. But you were given the gift of life for a reason! Throw off your chains and pass your burdens onto Yeshua who has already annihilated them at the cross. Take the gift and be free to be the person your Creator intended you to be!

The Scriptures, as always, says it best:

Thanks be to God for His indescribable gift!